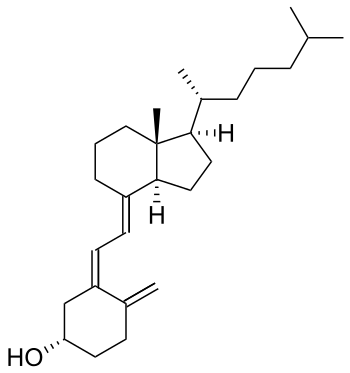 Children with type 1 diabetes were evaluated for vitamin D status in an area of Turkey with a known high rate of adolescent vitamin D deficiency. Children and adolescents (ages 3-20) were evaluated by blood tests for serum 25-hydroxyvitamin D levels, parathormone and alkaline phosphatase levels in 120 subjects. A blood level over 20 ng/ml was considered normal for vitamin D.

The study was done because vitamin D deficiency may reduce insulin sensitivity, and vitamin D is known to have many effects other than on bone health. Low vitamin D can cause “secondary hyperparathyroidism*” with a parathormone level above 65 pg/mL. Subjects were tested for vitamin D at different times of the year because of the dependency of vitamin D on available sunlight.

Vittestedamin D deficiency is a level between 5 and 15 ng/mL and insufficiency is 15-20 ng/mL, and testing showed 37.5% of the patients were vitamin D deficient or insufficient. Over 20 ng/mL is considered normal. Only 13 of the 120 patients had secondary hyperparathyroidism. Vitamin D levels did not correlate with the daily insulin dose.

NOTE: *Secondary hyperparathyroidism is the increased production of parathyroid hormone due to low calcium blood levels which results in as increase in the effort to absorb calcium and a decrease in other normal parathyroid functions, such as controlling the cell death of abnormal cells throughout the body (apoptosis).