Synergy of Green Tea and Herbs. 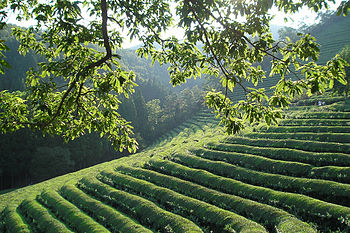 The following herbs were studied in combination with and without green tea: Grape seed, pomegranate peel, amla berry, cinnamon, and ginkgo. They are all known for high levels of vitamin C (ascorbic acid) and antioxidant activity.

After the literature was searched, the above five herbs were evaluated with the green tea extract, and plant extracts were made of those plants. Total flavonoid assays were measured, and multiple antioxidant assays were performed. The five herbs were mixed and added to different amounts of green tea. The highest phenolic content and the highest flavonoid levels were in the mixture with green tea. Grape seed extract alone was second best.

This study is based on the hypothesis that plant combinations have a synergistic effect when combined, such as with green tea, and are more protective than single plants alone. The combination of five extracts had the highest antioxidant activity when used with green tea with the ratio of green tea, grape seed, Amla, pomegranate, cinnamon and ginkgo. The ratio was 5:33:3:3:3.

CONCLUSION: Antioxidant activity of plants depends on plant chemicals. The highest antioxidant activity was seen in combinations of the above herbs with a higher dose of green tea, and is the result of synergism (two plants acting together are stronger than two plants separately).