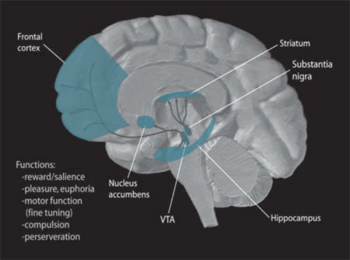 Dopamine Pathways. In the brain, dopamine plays an important role in the regulation of reward and movement. As part of the reward pathway, dopamine is manufactured in nerve cell bodies located within the ventral tegmental area (VTA) and is released in the nucleus accumbens and the prefrontal cortex. Its motor functions are linked to a separate pathway, with cell bodies in the substantia nigra that manufacture and release dopamine into the striatum. (Photo credit: Wikipedia)

Glyphosate* is a powerful herbicide which has been reported to be neurotoxic. Male rats were injected with glyphosate of 50 mg, 100 mg, or 150 mg over two weeks, and the effect on dopamine neurotransmitter activity was evaluated in the rats to determine the effect on nerve activity. The rats showed low levels of physical activity immediately following the injections, this lasted for two days with use of the highest dose.

Glyphosate injections resulted in poor binding of dopamine on the receptors** of the nerves in the nucleus accumbens of the brain. Low levels of dopamine were found external to the cells in the same region of the brain.

CONCLUSION: Glyphosate (as found in Roundup herbicide) alters dopamine neurotransmitter activity of the brains of rats. This is most likely to be true for humans as well. Further testing is needed to see if other neurotransmitters are altered by glyphosate.

NOTES: This summary is based on the author’s abstract only, since the full text is not free. We need the internet to be free, as there is important information in this article which people need to know to make healthy decisions.

*Glyphosate is the most active ingredient in the Roundup herbicide. Some genetically modified (GM) foods have been altered so they are not killed by glyphosate, whereas most plants are. In Europe where GM foods have been ‘controlled’, 40% of people in some studies still show glyphosate in their urine.

**Dopamine receptors are activated when the neurotransmitter dopamine reaches them. That’s how nerve cells communicate. Glyphosate somehow damages receptor activity. Alcohol in excess can also damage dopamine receptors. Deficiency of dopamine is believed to be an important component of most addictive types of behavior, especially alcoholism. The nucleus accumbuns plays a role in reward, motivation, pleasure, and learning.  (See the dopamine impoverished brain theory.)