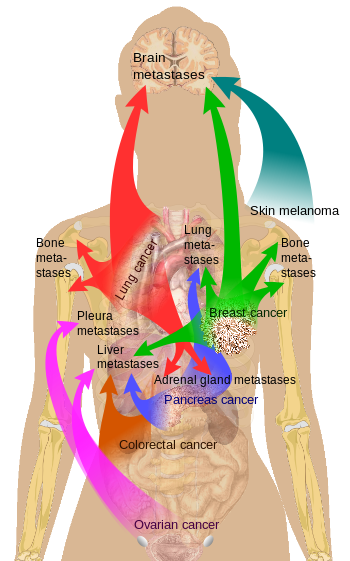 Main sites of metastases for some common cancer types. Primary cancers are denoted by “…cancer” and their main metastasis sites are denoted by “…metastases”. List of included entries and references is found on main image page in Commons: (Photo credit: Wikipedia)

Polyamines, including spermine and spermidine, can be produced by nearly all cells, especially in those with rapid growth. High polyamine levels are seen in blood and urine of many cancer patients and can be eliminated by successful treatment of the tumors. However, they increase with tumor relapse. (The complete role of polyamines in cancer invasion and metastasis is not known at this time.)

Polyamines are made from arginine and S-adenosylmethionine (SAMe) by the enzyme arginase. They are involved in cell growth and differentiation. Polyamine production is increased in cancer cells, and it is believed that humans can receive polyamines in their food pand from intestinal bacteria. “…inhibition of polyamine synthesis and availability by cancer cells could retard cancer cell growth.”

Cancer patients with high polyamine levels tend to have more advanced cancer and a worse prognosis than those with low levels. Since it is suspected that inhibition of polyamine synthesis in cancer cells may impair their growth, one method of blocking polyamines may be by inhibiting SAMe synthesis.

Polyamines are believed to cause increased cancer proliferation. Animal studies have shown that inhibition of polyamines can reduce cancer invasiveness and several steps in the formation of metastases. The immune suppression seen in cancer patients which allows cancer cells to go undetected by immune cells can be prevented by polyamine deprivation.

CONCLUSION: Polyamines are important for normal cell growth, and play a role in cancer progression, tumor invasion and metastases. Further studies are needed, but inhibition of polyamine production and absorption by cancer patients may prove to have therapeutic value.