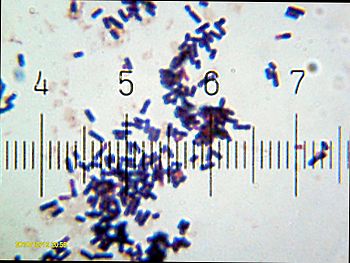 English: Lactobacillus acidophilus from a commercially-sold nutritional supplement tablet. 100× objective, 15× eyepiece; numbered ticks are 11 µM apart. Gram stained. The scale of the full-sized version of this image is such that each pixel is a 0.01477-µM square. (Photo credit: Wikipedia)

This review article is about the current knowledge of chronic low grade inflammation and it’s origin.  The antigens which cause it remain unknown but bacteria in the gut must be considered since they are a source of many antigens.

Bacteria developed before multicellular organisms, and animals having a tube which can be called a gut contain bacteria with which they have co-evolved.  The host animals to some bacteria gain protection from diseases, benefits to digestion, and improved brain function.  The mitochondria (energy producers) in our cells originated from gut bacteria.

The human digestive tract contains 10 times as many bacteria cells as the rest of the human body, and human gut contains 200 times as many genes as does the human genome.  Humans probably contain 2000 different species of bacteria, although only several hundred are found in any one person.  Three types of human bacteria are known: Bacteroides spp., Prevotella spp. and Ruminococcus spp.

Humans are born sterile and contract bacteria from the moment of delivery from the mother.  The gut bacteria of babies born by C-section and those not breastfed are different from most babies for several months.  These bacteria are important in directing body functions, such as the immune system and metabolism.  The intestinal lining begins to recognize bacterial antigens and learns to tolerate some of them, avoiding chronic inflammation.

Adult bacteria populations (microbiota) are altered by changes in food intake, antibiotics, hormonal changes (such as puberty), aging and anxiety.  The longevity of Italian centenarians is believed to be due to the effect that diets of their elderly have on their microbiota.  Some older humans in this study develop chronic inflammation, possibly as a result of their poor diets.

The authors previously showed that the presence of lipopolysaccharides (combinations of fats and sugars) from gram-negative bacteria can be the cause of metabolic diseases, such as insulin resistance.  Both gut bacteria and a fat-rich diet can lead to metabolic disease.  In humans hyperglycemia and insulin dependence depend on the gut microbiota.

Intestinal permeability is increased by feeding mice a high fat diet, with the appearance of harmful bacterial fragments in the blood.  Cardiovascular disease and metabolic disease seem to be linked to opportunistic bacteria in the mouth, which have increased in numbers due to modern diet changes.  Statin drugs used to lower cholesterol seem to work by promoting bacteria which lower the cholesterol.

CONCLUSION:  The gut microbiome may play a major role in the current epidemic of metabolic diseases, such as diabetes, lipid problems and cardiovascular diseases.  Prebiotics and probiotics may be important in therapy, not just in the control of hyperglycemia.