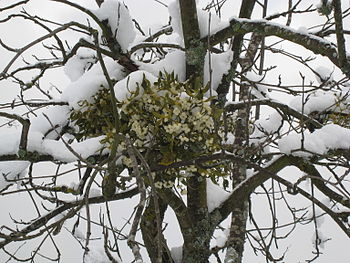 Vascular endothelial growth factor (VEGF) is a protein formed by cancers which promotes angiogenesis. VEGF is, probably, essential for cancer cell migration and angiogenesis. The blood vessels formed are immature and can lead to bleeding and edema. Tumors sometimes increase angiogenesis after radiation therapy.

Angiogenesis is a normal process in the placenta, fetus and wound healing. Cancers take control of this normal process and use it without normal regulation. Dr. Judah Folkman promoted the use of anti-angiogenesis as anticancer therapy. One such pharmaceutical is bevacizumab (Avastin.) Avastin extends life when used with chemotherapy, but, has serious side effects.

European mistletoe (Viscum album) is used against cancer in anthroposophic and homeopathic medicine. It lowers VEGF and induces apoptosis. One clinical cancer study seemed to show improved survival. The study had some design defects and definite conclusions could not be made.

Turmeric (Curcuma longa) contains the active ingredient, curcumin, which improves treatments with chemotherapy and radiotherapy and lowers VEGF. Nitric oxide (NO) levels correlate with tumor growth. Curcumin reduces with cellular production of NO.

Milk thistle (Silybum marianum) fruit and seeds contain silibinin and silymarin. They are polyphenolic flavonoids which suppress VEGF. This has been seen in human ovarian cancer.

Poria cocos is a mushroom extract which blocks angiogenesis.

Panax ginseng contains ginsenosides which are anticancer and anti-angiogenic.

Cancer is associated with high copper levels. The cancer-promoting activity of angiogenesis is copper dependent. Copper chelation to lower copper levels is one way to treat cancer.

CONCLUSION: A number of natural products are useful in treating cancer due to their ability to reduce angiogenesis. Further clinical studies are needed. They are believed to be especially beneficial due their reduced tendency to induce resistance in cancer cells.