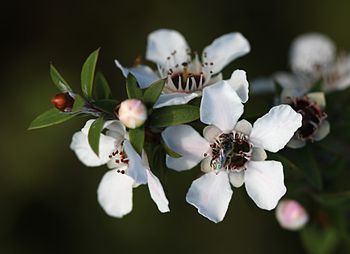 Honey has been used as a topical treatment for wound infections, and manuka honey* is known to be a broad spectrum antibiotic. Although resistance has been a problem with bacteria which produce biofilms (to protect themselves from antimicrobials) resistance of bacteria to manuka honey has not been demonstrated.

Some studies have shown that treatment of Pseudomonas (P.) aeruginosa bacteria results in a non-viable mass, and resistance has not been found to manuka honey. The present study was performed to determine whether the remaining mass after treatment could contain any bacteria able to survive in deeper layers. Tests were done to see whether any viable bacteria were resistant to manuka honey and two different antibiotics.

Biofilms are masses of extra-polysaccharides** produced by bacteria which provide protection from antimicrobials, especially in deeper layers. It is difficult for antimicrobials to pass through biofilms. The exposure of the protected bacteria to low levels of antimicrobial strength is believed to be the factor which provides resistance (since therapeutic levels do not reach them). Surviving bacteria can cause a new infection with resistance to honey or other antimicrobials.

By the usual microscopic examination, the bacteria in biofilms appear to be dead in most studies. The current tests used a three-dimensional technique to examine deeper layers of the biofilm. These layers, which had appeared to be dead, were found to have survived, and resistance to manuka honey was demonstrated. Repeat culture of the surviving bacteria continued to show resistance as well as increased ability to form biofilms.

Also, the manuka honey-resistant bacteria were found to be resistant to two antibiotics (mimpenem and rifampicin). “Bacteria acclimatize quickly to antimicrobials; it can be a matter of months between the introduction of a new antimicrobial and the appearance of resistant strains.”

CONCLUSION: Topical treatment with manuka honey must be concentrated, but used continuously until infection is eliminated to avoid development of infections resistant to manuka honey.

NOTE: *Manuka honey is from Australia and New Zealand, and is made from the flowers of the manuka tree (Leptospermum scopurium).