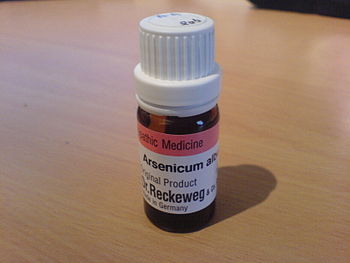 Millions of people, especially in West Bengal, India and Bangladesh live in areas where water contains high levels of arsenic. The problem is known to exist in 20 countries. High blood levels of arsenic can cause skin rash, alter the circulation and lead to cancer. Arsenic can interfere with the activity of up to 200 enzymes, causing liver dysfunction and depletion of glutathione (GSH) (an enzyme needed for detoxification).

A search for treatment led to the use of homeopathic Arsenicum album 30C for a short time, and Arsenicum album 200C for a longer period. The present study evaluated Arsenicum album LM in one contaminated village for a longer time. The water well levels of arsenic ranged from 55 to 95 micrograms/liter. People suffered from liver and digestive symptoms, insomnia, muscle and joint pains, burning of the eyes and skin, and abnormal pigmentation.

It was difficult to get subjects to volunteer for this study. Some were weak and afraid to give blood, so only 14 patients reported for the follow-up study. Liquid drops of the remedy were given (millesimal scale 50,000), and follow-up included urine and blood testing, including liver enzymes.

The study showed that Arsenicum album LM reduced the effects of arsenic poisoning as well as 30C and 200C did. Arsenicum album LM can be taken for a longer period of time, so it is advised for use in remote villages with no arsenic-free drinking water. The remedy may act as a “molecular switch” to activate certain genes and deactivate others.

CONCLUSION: Arsenicum album LM can be used for arsenic toxicity.