Heavy Metals in Vegetables Grown in an Old Mining Area. 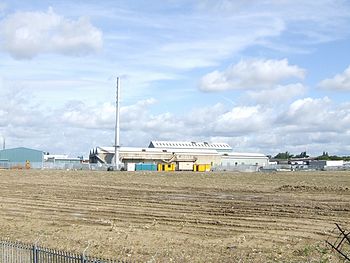 English: Works and brownfield site My old map shows a spelter(zinc)works on this site. Like many of the brownfield sites within the Black Country the ground here would probably have been contaminated with heavy metals. (Photo credit: Wikipedia)

Heavy metals, such as iron (Fe), manganese (Mn), copper (Cu) and zinc (Zn) are found everywhere in our environment and become part of our food chain as coenzymes.  Oversupply of these metals can cause toxic effects.  Some metals, such as lead (Pb) and cadmium (Cd) are toxic even at low levels.  Vegetables can be a source of all of these metals, especially when grown in contaminated soil.

Romanian mining has been a source of minerals for Europe for one hundred years.  The soil was widely contaminated.  This study was conducted to test whether vegetables should be grown for humans in these soils.  Fe, Mn Zn, Cu, Ni, Cd and Pb were tested in parsley, carrot, onion, lettuce, cucumber and green beans.  This information was used to calculate the THQ (total hazard quotient) or the concern from pollution of eating a vegetable grown in that area.

Cd and Pb are the most toxic metals found.  Pb was found in vegetables even in non-contaminated areas.  Cd was found only in contaminated areas, where it transfers rapidly from soil to plants.  Also, Pb was found in leafy green vegetables, especially in parsley leaves, cabbage, carrot leaves and lettuce.  Leafy green vegetables are known to be “heavy metal accumulators”.  High levels of lead were found in green beans.  Overall, many toxic vegetable levels exceeded the upper tolerable limit (UL).

CONCLUSION:  The worst contaminant was lead in parsley and carrot roots and green leafy cabbage and lettuce from one certain area.  Vegetables, especially parsley, carrot, cabbage, lettuce and green beans, grown in contaminated soils in industrial areas present health concerns from chronic use.

NOTE: Read about the development of medical geology in Uruguay.