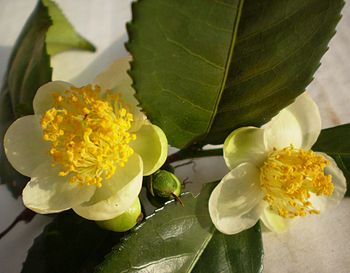 Green tea (Camellia sinensis), which contains chemicals called catechins, have many health benefits, such as anti-inflammatory and anticancer activity.  The dominant catechin is EGCG (epipallocatechin-3-gallate).  One cup contains 78 mg. of EGCG, but higher doses are available in capsules.

The movement of chemicals such as calcium and sodium across cell walls of heart cells may be altered by EGCG, but there have been few studies.  The pathways through the cell walls are electrically sensitive.  To find more information, the authors studied the effect of EGCG on the EKG (electrocardiogram) of guinea pigs.  They also studied directly the effect of EGCG on the voltage of heart cells in cell cultures.

At the lowest doses, EGCG did not change the EKGs of guinea pig hearts.  At 30 micromol concentration of EGCG, the EKG was definitely changed in the shapes of ST wave and the end of the T wave.  There was no change in the heart rate.

The electrically-charged channels for the transporting of elements such as sodium and potassium across heart cell walls were studied.  The maximal effect of the potassium, sodium and calcium channels was seen at the 100 microgram concentration.

CONCLUSION:  Green tea extract, EGCG, can alter the wave form of the EKG.  This study suggests that EGCG can interact with other heart medications, and caution should be used in taking them together.

NOTE: Read about the the synergy of green tea and other herbs.