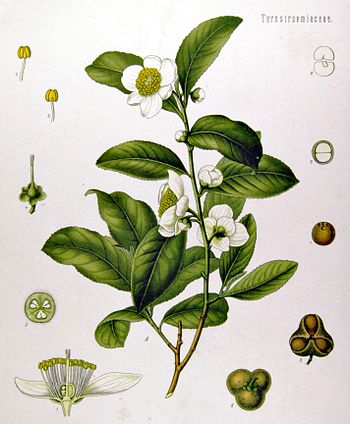 Most of the world’s tea is grown in China where much of the land is in high-risk areas for climate change. The cycle of drought followed by monsoons has become a pattern over the past 40 years. The study took place in an evergreen broadleaf forest where the tea grown is of premium quality, and it is harvested three times a year. The first harvest is during the dry spring season, and the second harvest is during the start of the monsoon season. There is even a third harvest at the end of the monsoons.

Climate change is having an impact on agriculture around the world, causing changes in crop quality reducing farm incomes. This change alters the markets for tea (Camellia sinensis) in China. The present study was to evaluate the effects of severe climate changes on tea quality, farmer knowledge of product quality, and changes in farm incomes. Researchers studied one of the most severe droughts in recorded history which occurred recently in Yunan province, followed by the East Asian annual monsoon. The dry period is usually six months long. These severe climate alterations are expected to become more prevalent and more severe.

Testing of the tea samples was done for eight antioxidant polyphenols and three methylxanthine* chemicals (which are important for tea quality). Climate change alters tea production quality as measured by the amount of methylxanthine, caffeine and catechins**, responsible for tea’s stimulant, antioxidant, anti-inflammatory and heart protective effects. The taste of tea indicates to the experienced drinker the health-giving quality of a cup of tea through astringency, bitterness and sweetness. Subsequently these quality changes alter farmer’s incomes.

Tea leaves from the spring drought were smaller and drier than those from the monsoon onset. The levels of polyphenols (including EGCG) and methylxanthine were decreased with the onset of the East Asian monsoon. The samples judged by the farmers to be of high quality were those that tested high for phenols and methylxanthine. Increased monsoon leaf size correlated with lower levels of beneficial tea chemicals. Chemicals which decline with higher precipitation are associated with flavor, health claims, and tea stimulant effects. The consumption of catechins is inversely associated with chronic diseases, such as cardiovascular disease, bone and skin health, inflammation, oxidative stress, cancer, neurodegenerative disease and metabolic syndrome.

Farmers’ knowledge of the seasons, changes of tea quality by climate, and the impact of climate on income, as studied by surveys and interviews, was shown to be accurate. There was agreement among people that during their lifetimes there have been significant changes in “tea yields, quality, and associated livelihoods. In the past decade, there has been a 30-50% drop in incomes in the studied area from the sale of tea.