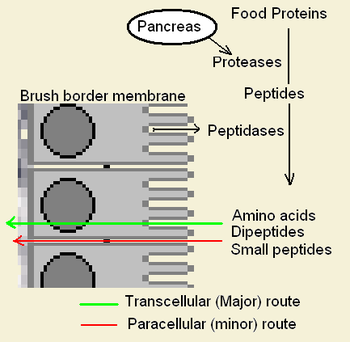 Wheat, rice and corn are the most widely used grains worldwide. Wheat is eaten as bread, pasta, bulgar and couscous, and gluten is the main structural protein in wheat, with rye and barley having similar protein. Wheat gluten contains gliadin and glutenin proteins. Gluten was added to the human diet about 10,000 years ago and has increased in amount by wheat breeding.

CD is an auto-immune disease due to eating gluten, and may start months to years after adding gluten to the diet. CD frequency is increasing, possibly due to “Westernization” of the diet in many countries. Genetics play a part in the development of CD as well. Symptoms of CD include diarrhea, weight loss, anemia, osteoporosis and neurological abnormalities. Testing for CD includes serum IgA* testing, small intestine biopsy, genetic testing, and a trial on a gluten-free diet. There is increased intestinal permeability in CD leading to further complications.

Dermatitis herpetiformis is a rare skin form of CD with a “blistering” rash and IgA deposits. The rash improves on a gluten-free diet. Testing includes skin biopsy and serum IgA. Gluten ataxia is intermittent ataxia (incoordination and imbalance) related to CD. It is autoimmune and can result in cerebellar damage and neuropathy. Few of these patients have intestinal symptoms, and the symptoms are improved by a gluten-free diet if started early. Serum IgG** antibodies are abnormal in this disease.

Gluten reactions which are not allergic and not autoimmune are called gluten sensitivity. Diagnosis is made by exclusion of allergic and autoimmune disease, and people with gluten sensitivity feel better on a gluten-free diet. The symptoms are behavioral changes, bone and joint pain, muscle cramps, leg numbness, weight loss, and chronic fatigue. There can be abdominal pain, rash, headache, “foggy mind,” diarrhea, depression and anemia. A gluten-free diet is recommended.

CONCLUSION: High rates of gluten-related disease may result from 10,000 years of breeding of wheat for higher levels of gluten. Breeding is done for technological reasons related to food processing, and this is not paralleled by changes in the human immune or gastrointestinal systems. Gluten-related problems include gluten allergy, autoimmune disease (such as celiac disease) and gluten sensitivity. Wheat, barley and rye must be completely excluded from a gluten-free diet. Even traces of gluten can cause symptoms.