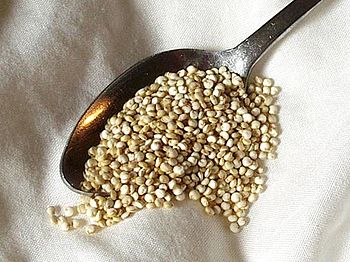 Quinoa is not a grass, but its seeds have been eaten for 6000 years. (Photo credit: Wikipedia)

Gluten is a group of proteins called prolamins, which are metabolized to proline and glutamine amino acids, which resist digestion. Different grains have different prolamins. Celiac disease (CD) is an autoimmune disease which can only be treated by a gluten-free diet at this time. The reaction is caused by the gluten protein contained in a variety of cereals, including wheat, barley, rye and oats.

Gluten is inexpensive. It can be found in meat, fish, and milk products. New cereals without gluten are being developed, and varieties of wheat are being studied to find any which are better tolerated by celiac patients. Attempts are being made to hybridize barley to contain less gluten. Oats produce less proline and glutamine amino acids than do other more toxic* cereals, which can be tolerated by most people intolerant of gluten. However, other grains can contaminate oats with gluten during harvesting and processing. (The toxicity of oats to people with celiac diseases is still being debated.)

Long term adherence to a wheat-free, gluten-free diet can lead to nutritional deficiencies, because the grains and cereals used have some micronutrient and macronutrient deficiencies. Attempts are being made to add protein and omega-3 to such products. Gluten-free products commonly contain cereals (rice, corn and sorghum), minor cereals (fonio, teff, millet, teosinte, Job’s tears), and pseudocereals (buckwheat, quinoa, and amaranth).

Rice flour is known to be hypoallergenic. Some CD patients who did not do well on a gluten-free diet improved on a corn-free diet. Fonio is said to be the tastiest cereal, teff is the smallest grain, and Job’s tears is known as Chinese pearl barley. Amaranth and quinoa are used for gluten-free flours because they lack the toxic seed proteins and have high nutritional value. The essential amino acids are high in amaranth and are well balanced. Quinoa is considered safe for CD. Canary seed may be a good alternative to gluten products.

Genetic engineering is being used in an attempt to reduce the gluten content of wheat for use by celiac patients. So far, gluten proteins can be reduced by 56%, and the flours produced perform well for baking. Enzymatic methods can be used to degrade dietary gluten. Peptidase enzymes can make toxic proteins into nontoxic fragments. Peptidase enzymes are found in bacteria, fungi, animals, plants, and lactobacilli from sourdough. A combination of lactobacilli and fungal peptidases together eliminated wheat flour toxicity during fermentation. Germination of seeds can reduce toxic proteins and make grains safe for people with CD. Germination of wheat, rye and barley greatly decreased their prolamine contents.

CONCLUSION: Today, celiac disease treatment means a life of a gluten-free diet. New grains and cereals are being found to substitute for wheat, barley, and rye, and new techniques are being studied to reduce the prolamine content of foods.

NOTE:  *Toxic in this sense refers to the toxicity of gluten-containing foods to the intestine.