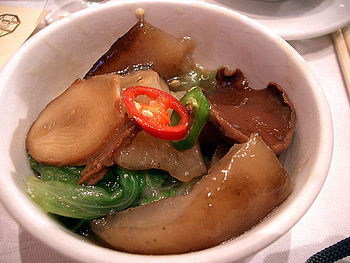 In spite of the wide variety of cancer types, there a few basic mechanisms in their cellular behaviors. Most cancers develop because of acquired genetic changes allowing cancer cells to have survival advantages. To survive the ability to develop new blood vessels (angiogenesis) is necessary, and cancers usually develop the ability to metastasize. Poor immunity against cancer contributes to cancer growth. Most chemotherapeutic agents work to alter chemical pathways in rapidly dividing cells, which may lead to serious toxicities when normal rapidly-dividing cells are exposed to these toxic chemicals.

Polysaccharides (complex sugars) from plants and algae can have anti-cancer properties and work in combination with anti-cancer agents. Fucoidan is a polysaccharide from seaweed, like kombu, bladderwrack, and wakame. It has also been found in sea urchins and sea cucumbers, and brown seaweeds are part of the diet of East Asia. Fucoidan has been well-studied in the laboratory, but only a few clinical trials have been done.

Apoptosis is a natural form of cell death from within a cell, without producing inflammation in surrounding cells. Lung, breast, and colon cancer cells can be caused to undergo apoptosis by fucoidan treatment.

Fucoidan significantly reduces tumor cell metastasis to the lungs. It can also increase the number and activity of natural killer (NK) cells. NK cells seek cancer cells and destroys them. Fucoidan has been shown to reduce the malignant transformation of normal cells into cancer cells.

Fucoidan works synergistically with chemotherapy agents. One study gave colorectal patients a high dose of fucoidan with a combination containing 5-fluorouracil. The patients did not get allergic dermatitis, and general fatigue was reduced from 60% to 10%.

Use of fucoidan is complicated because it occurs in various forms and molecular weights. Different studies have used various extractions of fucoidan, and widely varying doses have been used in different studies. Consistency in the composition of fucoidan in future studies will likely lead to more uniform results. Fucoidan taken as food in brown seaweeds is considered to be safe, although there have been few clinical studies on humans with cancer. High doses of fucoidan in mice did cause some toxicity, such as increased clotting times and altered serum triglycerides. Doses given to adults over a long period of time have shown the potential for bleeding problems and diarrhea.

CONCLUSION: Fucoidan has strong potential for use in combination with anti-cancer drugs to reduce side effects of chemotherapy. It increases cancer cell death and suppresses metastasis and angiogenesis. More clinical studies are needed to help determine dosages and desired molecular forms.