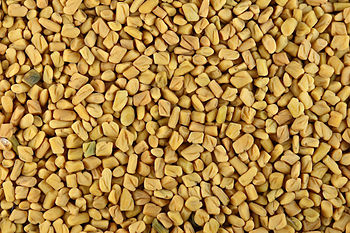 Fenugreek (Trigonella foenum-graecum) extracts of seeds and leaves have been used to control hyperglycemia in diabetes in the Ayurvedic and Unani medical systems of India.  The seeds are 50% fiber (30% soluble and 20% insoluble); fiber is hypoglycemic by slowing the absorption of glucose in the intestine.  Fenugreek increases the secretion of insulin in type II diabetes in rat cells.

In humans, fenugreek is hypoglycemic and lowers cholesterol, triglycerides, and low-density lipoprotein cholesterol (LDL-cholesterol).  Early studies indicate that fenugreek seed powder can reduce blood sugars and lower high levels of blood lipids.  The authors have done studies which have shown that fenugreek is almost as strong as insulin in reducing blood sugars.  Vanadium and manganese improve the ability of insulin to lower sugars, also.

Fenugreek and vanadium were studied on various body tissues and found beneficial in diabetes.  Insulin and manganese may have similar effects on metabolism.  Vanadium mimics the effect of insulin in some ways.  Fenugreek powder in diabetic animals lowers blood sugars and normalizes enzymes for carbohydrate and fat metabolism.  Vanadium had a similar effect.  Fenugreek, vanadium, manganese, and insulin all lower blood glucose and return serum enzyme levels to normal.

Oxidative damage to tissues is believed to play a big part in complications of diabetes.  Antioxidant enzymes needed to overcome the oxidative damage include SOD (serum oxide dismutase), CAT (catalase), GR (glutathione reductase) and GPx (glutathione peroxidase).  These enzymes are deficient in diabetes, and oxidative stress is greater as a result.  Vanadium was able to restore enzyme activity (but resulted in significant weight loss in rats).

People who are allergic to chickpeas may be allergic to fenugreek.  Some people get diarrhea or gas on fenugreek, and  Hypoglycemia may occur on fenugreek therapy.  Since fenugreek is a fiber, it should not be taken at the same time as prescriptions.

CONCLUSION:  Extract of fenugreek is shown to be nearly equal to insulin in the control of hyperglycemia in diabetes.  Vanadium and manganese are anti-diabetic also.  A combination of fenugreek and vanadium can reduce hyperglycemia and oxidative stress.

NOTE:  Vanadium is an element consisting of only one type of atom.  Vanadyl and vanadate are different forms of vanadium.  It is found in mushrooms, shellfish, black pepper, parsley, dill seed, and grains.  (Vanadium was named for Vanadis, the Nordic goddess of beauty or Freyja.)