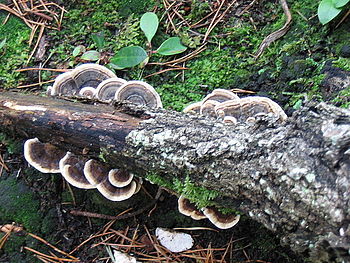 Prostate cancer is the most common male cancer in the western world. When surgery is not possible, *hormone ablation therapy is used; however, most patients eventually relapse. Chemotherapy has poor results with excessive side effects.

Prostate cancer stem cells (CSCs) have been identified as the possible source of prostate cancer, but these cells are highly resistant to most current prostate cancer therapies. Most therapies have been aimed at more mature cancer cells. Food components have been found to have anti-CSC properties, such as the gamma-tocotrienol form of vitamin E (which suppresses prostate CSCs).

An extract of turkey tail mushroom (Coriolus versicolor) known as PSP (polysaccharopeptide) has been shown to be effective in cell studies and living mice. Treating mice which develop prostate cancer spontaneously with PSP has resulted in total inhibition of prostate cancer.

Prostate CSCs form ‘prostaspheres’ in cell culture, and formation of spheres is one property of prostate CSCs. When PSP is added to the culture, prostasphere formation is inhibited. Transgenic mice, which spontaneously develop prostate cancer, were fed 300 mg/kg of PSP for 20 weeks. Of the five mice tested, none had prostate cancer. Three of the treated mice developed PIN (prostatic intraepithelial neoplasia), which is considered a premalignant condition. Two treated mice were completely normal.

CONCLUSION: The author’s findings suggest that PSP is a safe and effective treatment for prostate cancer. This is, most likely, the result of suppression of prostate cancer stem cells. Next, human studies are needed.

NOTE:  *Hormone ablation therapy for prostate cancer includes removal of testosterone activity by drugs or surgical removal of the testicles.