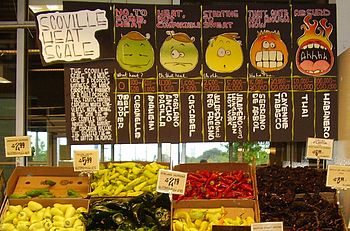 Around the world, 2.8 million people die annually due to being overweight or obese.  This is the result of excess energy intake over energy expenditure.  Capsaicin from red chili pepper increases energy expenditure and is currently being considered as treatment for obesity.  Capsaicin is thermogenic (burns energy).

The Scoville scale is a rating of the amount of capsaicinoids in a red chili pepper, and some peppers contain 50,000 SHU (Scoville heat units).  It seems to work best when taken directly in the mouth as opposed to a capsule.  (This could be because the pain on the tongue increases heat production.)  Capsaicin has been shown to enhance thermogenesis.  This study was designed to see if capsaicin can reverse the normal reduction seen in energy expenditure following a reduction in energy intake (compared to controls with balanced energy intake without capsaicin).

Nineteen active, healthy subjects were studied who were not on restricted diet.  They were studied in a special room to measure energy expenditure, oxygen use and carbon dioxide production.  For two days at home, they were fed an energy balance diet.  They then spent 36 hours in the chamber for 4 sessions on a diet providing negative energy balance.

Concentrations of oxygen and carbon dioxide were measured in the air of the chamber every 15 minutes.  Oxidation of carbohydrates, fats, and protein can be calculated by the oxygen consumption, carbon dioxide production, and the amount of nitrogen in the urine.

Results of the study reveal that energy expenditure was lower when the diet was reduced below that needed for energy balance.  The addition of capsaicin was seen to counteract that effect and increased fat oxidation while also increasing energy expenditure.  No blood pressure changes were seen.

CONCLUSION:  When oral intake is limited, capsaicin can promote a reduced-fat body composition, although weight loss is not guaranteed.