B-12 and Folic Acid in Vegans, Vegetarians and Omnivores. 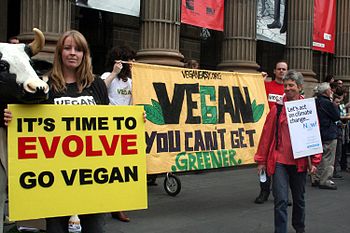 Vegans at the Melbourne “Walk against Warming,” December 12, 2009, during the Copenhagen Summit on climate change. (Photo credit: Wikipedia)

People on vegetarian or vegan diets have a lower risk of cardiovascular disease and a higher risk of nutritional deficiencies than omnivores.  Vitamin B-12 is found naturally in animal products and in artificially fortified foods (breakfast cereals, plant-based milks, soy products and yeast extracts).  Vitamin B-12 deficiency is defined as a blood level below 118 nmol/liter; folate deficiency is defined by a blood level below 6.3 nmol/liter.

The present study of men was extracted from a study of 65,000 people from 1993 to 1999.  Omnivores ate at least 3 servings of meat per week.  Lacto-ovo vegetarians used soy milk and soy products.  Vegans ate no animal products.  Blood levels of vitamin B-12, folate, and homocysteine, etc., were drawn on enrollment in the study and the vegan men were retested in 2001.

Serum B-12 of vegans was 33% lower in vegetarians and 57% lower than in omnivores.  Fifty-two percent of vegans and 7% of vegetarians were B-12 deficient.  “There was no significant difference in mean serum concentration of vitamin B-12 between men who reported taking a vitamin B-12 supplement compared to non-users of supplements in any of the diet groups.”  Only a few men in all groups were folate deficient.

Men on a vegetarian diet are at risk of being B-12 deficient in this study.  When B-12 is restricted, the blood level of B-12 seems to drop rapidly within months.  Some plant-based vitamin B-12 supplements are reported to be inactive.  Neurological damage can result from B-12 deficiency, such as degeneration of the spinal cord with difficulty in the arms and legs.

NOTE:  Folate can mask anemia seen in B-12 deficiency, but does not prevent spinal cord injury from B-12 deficiency (pernicious anemia).  According to this study, note that supplementation with B-12 does not always make up for deficiency in the diet.

NOTE: Read about folic acid and foods which contain it.