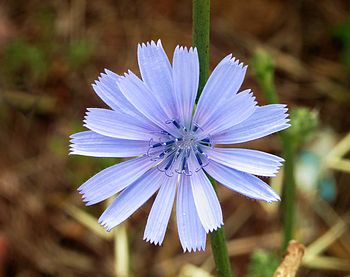 Chicory (Cichorium intybus) is a plant used in Ayurvedic medicine for inflammation, menstrual problems, liver disorders, and fever. The root was used in the present study. The leafy greens are used in salads and for cooking, and the ground roots have been used as a coffee substitute and contain inulin. This study was done to test the anti-inflammatory activity of chicory.

An extract of chicory root was prepared to test its use for inflammation in rats. Some rats served as controls and were given water only to drink, and some were given aspirin in water to drink. One group received 300 mg/kg of chicory extract in alcohol, with one group receiving 500 mg/kg. The last two groups received either 300 or 500 mg/kg of chicory extract in water. Inflammation was induced in the rats by injection of carrageenan in the right paw, and then paw volumes were then measured hourly. A calculation was made with these figures to determine the percent inhibition of inflammation. The injured paw was used for testing inflammatory enzymes.

Another group of animals was implanted with sterile cotton pellets under the skin. The animals were treated for 7 days, and the cotton pellets were removed with the scar formation and weighed. The differences in weight before and after the treatments were used in another formula to determine the percent of inhibition. Testing of the rat’s blood was done for anti-inflammatory enzymes and factors related to inflammation.