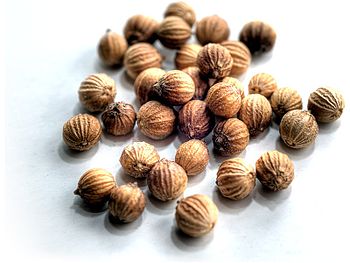 The aim of this study was to evaluate the anti-anxiety activity of an extract of coriander in animals as compared to diazepam (Valium). Coriander (Coriandrum sativum) is an herbal remedy which has many uses. It is a spice used in many parts of the world as well as a medicine in the Indian medicine tradition for digestion, lung problems and urinary symptoms. Dried coriander powder was obtained from coriander fruit, and doses of an extract of the powder were made of 50, 100 and 200 mg/kg. Alternate mice received .5 mg/kg of diazepam for comparison.

Levels of anxiety or fear were evaluated by a number of tests performed on the mice, and one test was to determine how long the mice would stay in the open arm of a maze. This time, indicating less fear and anxiety, was increased compared to the placebo-treated mice by an injection of diazepam. The 50 mg/kg dose of coriander had no effect on the mice;

however the 100 and 200 mg/kg doses increased the amounts of time spent in the open arms of the maze.

When tested in a box having light and dark compartments, the mice spent much more time in the light section after they had received diazepam or coriander (100 or 200 mg/kg), suggestive of less anxiety. Coriander at 50 mg/kg had no effect on this test, however diazepam and coriander at 100 and 200 mg/kg increased the mice’s social interaction scores as compared to saline treatment.

Linalool, an essential oil, is the only component of coriander which has been found to have anti-anxiety effects. Linalool may work by way of the GABA (gamma-aminobutyric acid) receptor complex, as does diazepam. Coriander may be useful in Alzheimer’s disease and other neurodegenerative diseases. It is also known to improve memory, lower cholesterol and is anti-cholinesterase.