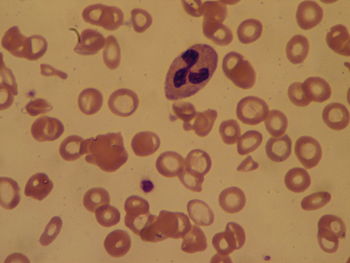 In a series on infants in a single hospital in the state of Rio Grande de Sul, Brazil, 64% were anemic with a hemoglobin count of less than 11 g/dL. Of those tested for ferritin, 90% were iron deficient. The researchers performed an interventional trial of intensive dietary counseling for one year. Exclusive breastfeeding was promoted for the first six months, and iron-containing foods were permitted the second six months. Iron supplements were not advised. These interventions had no effect on the iron status of the infantse

In the United States, the American Academy of Pediatrics recommends that to prevent iron deficiency anemia, breastfed infants after 4 months of age should receive iron supplementation or complementary foods. An example would be iron-fortified cereals. The best source of iron is red meat due to high bio-availability of the iron. Meat is a good source of zinc.

The iron status of the infants in the Rio Grande de Sul study would probably have improved if iron supplementation had been used. The upper limit of iron intake for these infants is 40 mg/day.