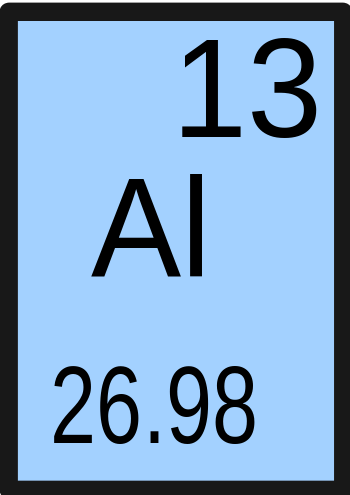 Aluminium or aluminum is a chemical element. It has the symbol Al; its atomic number is 13. (Photo credit: Wikipedia)

Although aluminum (Al) is the most common mineral in the Earth’s crust, it seems to have no useful function in plants or animals. Al was unknown in our environment until extraction for industrial uses began in the 1820’s. Humans get Al internally mostly from food. Now it is used in “food processing, manufacturing, medicines, cosmetics, vaccines, and other applications”. Al is used in water treatment plants, and is found in drinking water as a result. It is commonly present in antacids, coatings for pharmaceutical tablets, and coatings for vitamin tablets. Tea plants have higher levels of Al than water does, because the plants concentrate it.

This paper proposes to show that Al is harmful and is not safe even in trace amounts. Alzheimer’s disease research supports the theory that it is a result of chronic Al neurotoxicity. Al sulfate has been shown to be a potent cause of reactive oxygen species and an important cause of increase of inflammatory genes. Al can become part of amino acids and cause proteins to become unstable.

Al is commonly used as an adjuvant* in vaccines, and has been shown to cause autoimmunity and inflammation. Al from adjuvants can cross the blood-brain barrier and cause inflammation and damage of brain tissues also. Glyphosate can combine with Al to increase passage of Al into the blood stream and into the central nervous system. Al may even cause death (apoptosis) of nerve cells.

Al can interfere with the process of methylation, contributing to epigenetic abnormalities of DNA, RNA, and cellular proteins. It can also alter the transport and metabolism of iron. Al can alter molecules which ordinarily transfer iron across the blood brain barrier, so they can transfer Al into the central nervous system. Al may be related to the inflammation seen in autistic encephalopathy.

CONCLUSION: Aluminum can destroy cells in any system of the body, but the central nervous system is the most easily damaged and may not easily be repaired. Al can damage both cells and the cells’ DNA which otherwise could function to repair them. Because of the severity of the effects of Al, policies to limit human exposure to Al must be considered by policy makers.

*Adjuvants are chemicals added to chemical agents such as vaccines and herbicides. They increase the effectiveness of the chemical agents, although the way they work is poorly understood. They are considered “proprietary secrets” by the manufacturers.